On November 16, 2015 Martha (my XYL) and I flew from Ottawa to the Stockholm ARLA airport. We were going to visit our son Nicolas’ family in Storvreta, North of Uppsala. The occasion was the birth of Damian, his and Michelle’s second son (and our third grandchild). I was expecting to spend most of the time with Dominic, Damian’s 3-year old brother, and the baby. However, while not “on duty” I also expected to be able to make a few QRP QSOs as SM5/VE3DTI, for which I had acquired a CEPT license.

The weather in Storvreta was already too cold and humid to operate outdoors, and there was no easy way to rig the LNR Par EndFedz antenna outside the house and bring the coax indoors. Hence I settled on the Walkman Alexloop, my travel magnetic loop, which my family kindly allowed me to deploy indoors, in a corner of their living room, next to a very confortable Swedish chair. 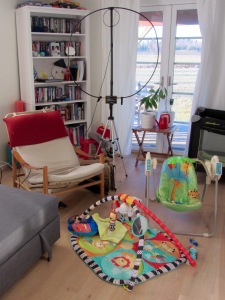 To keep the cables to a minimum and for quiet operation I opted to operate only CW, with earplugs (i.e., more family-friendly than earphones). The key was the single-paddle Palm Radio key. The rig was the Elecraft KX3 set at 5W. The Alexloop was oriented N-S and was tuned frequently using the macros described elsewhere in this blog (https://thewakesileave.wordpress.com/2015/10/02/two-kx3-macros-for-accurately-tuning-the-alexloop/). The log was kept in real-time in the MacBook Pro using RUMLOGNG v.2.2, the new version of RUMLOG, the superb logging program by Thomas Linder DL2RUM. Operation was S&P and the dial was scanned manually and regularly in its entire span. All CW sending was manual at abt. 20 wpm.

Propagation was average for this time in the Solar cycle, with SFI around 100 and the Kp between 2 ans 3. Within a week (Nov 20 to 27) I had logged 41 QSOs in 4 bands (40m, 30m, 20m and even 15m), from Asian Russia to Western Europe. However no station from the American continent was ever heard. The 40m band started to open in the early morning (4:00 to 5:00 AM local) mainly towards the SE, with the middle bands following shortly afterwards. The impression was very clear that propagation progressed westward during the day, with the bands starting to close in mid-afternoon. Sweden is UTC+1 which means that it is 6 hours later than EST, but more important than that is that at this time of the year day light time is already significantly shorter: sunrise is at 07:00z and sunset at 15:00z) and that Sun at no time raises more than 10-15 degrees above the horizon. My assumption is that by the time Europe starts to open up for the Americas the bands are already starting to close-up in Southern Sweden. This may be less of a problem for large directional antennas, but may be more limiting for a small magloop indoors.

On November 28-29 was the CQ WW CW contest, and I decided I would participate only the first day, in and out depending on the schedule of the family. I also decided to operate only in the 20m band. For logging contest I switched to RUMPED v. 3.2.13, another excellent program by Thomas DL2RUM. Six of the seven contacts made in the first half-hour starting at 05:30 UTC 96:30AM local time) were in Asian Russia, and the last two contacts (at 17:00 UTC, 18:00 local time) were in France. The operating time in these 12 hours was close to 5 hours, at the end of which I had logged 104 QRP QSOs, bringing the total of QSOS from Storvreta to 141. With that, I closed shop (ok, maybe I closed shack…) and decided that the last few days would be devoted entirely to the family. Besides, it was time for the Alexloop to make room beside the window for a tall, bright and colourful Christmas tree… Furthermore, if results from this year were similar to those in the previous one, I would rank second for Sweden in the QRP 20m band category,  way beyond what I had intended.

At over 4.500 Km, several of the contacts in Asian Russia were the furthest reached, and the shortest, at only 10 Km, was the single contact in Sweden, with Johan SM5F. Here is a graph of the 20m QRP QSOs logged Nov 20-28, 2015. This graph was produced using the online program by OK2PBQ (http://ok2pbq.atesystem.cz/prog/qso_map.php):

I thought it would be nice to try to provide evidence on the impression I had about propagation progressing westward during daylight. Hence I entered the Grid for each contacted station in the “DistBear Tool” by Rex KK6MK (http://www.xertech.net/Projects/DistBear.html) and used it to determine their bearings (clockwise angle measured from True North) with respect to my location (Grid: JO89UX). These bearing were then plotted vs. the time of the day in which the contacts were made. The linear regression analysis produced the straight line plotted on the following graph and showed that the upward (or westward) progression of the preferred bearing was more than would be expected by random chance (i.e., it is “statistically significant”). Neat! 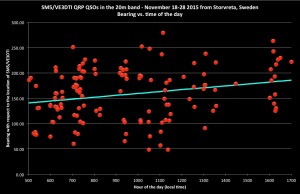 3 thoughts on “Europe and Asia /QRP/P from Norse Lands, with a Magnetic Loop Indoors”