To this operator, a few years ago, a “Work All States” (“WAS”) certificate seemed a pie in the sky. After working QRO for a handful of years only a few states had been contacted, and after turning QRP and operating only with portable equipment and small antennas, the prospective of being able to contact all 50 states in the US seemed a daunting task.

Then, after a few more years and with some 3,000 QSOs in the log, the ARRL LoTW suddenly announced that all the states in the United States of America had at least one QSO confirmed. Regardless of the power, the mode or the band, in August 2014 a “mixed” ARRL WAS Certificate was awarded by the ARRL (see here).

Almost a year later, the same was possible with contacts made only in CW using only QRP power, and in July 2015 the second ARRL WAS, this time “CW”, was awarded by the ARRL (see here).

That was very nice. However, something was missing… ARRL does not specifically recognize the effort that goes on contacting all the states with QRP power or, more particularly, on recognizing the fact that the contacts may all have been made using small wire antennas (“SMA”). This is the responsibility of the North America QRP CW Club (NAQCC) WAS Award, awarded by the NAQCC to stations contacting all states with QRP power and using small wire antennas: Here is VE3DTI’s (NAQCC member Nr .6008) “NAQCC SMA WAS Award” awarded on February 13 2016: 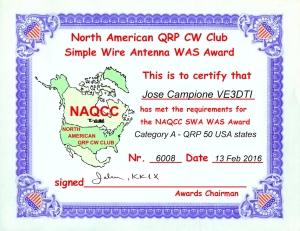 … and with an extra twist: although QSL’s are not required for this award, each and everyone one of the CW QRP QSOs used to apply for the NAQCC SMA WAS had been confirmed in LotW.