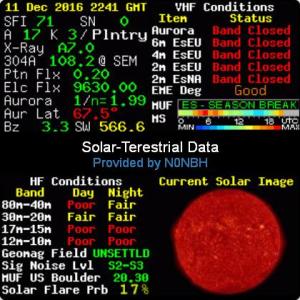 With SFI=71, SSN=0 and Electron Flux close to 10,000, there was not much hope for an antenna-challenged QRP Canadian station to log a single QSO in the ARRL 10-Meter Contest. However, there was always a possibility of near-by stations operating NVIS antennas or perhaps 10-M Sporadic E bubbles with which to take advantage of the many stations that would have been calling from locations all over the world.

The first impression when listening at the activity across the band was that there was nothing out there. The band was almost noiseless but the only signals I could hear in the CW portion were a few continuous (carrier?) signals: one at the very bottom of the band and another at 28.0305 MHz, together with a couple of fainter ones in the lower portion of the band. I was also able to hear the VE3CRO 10W beacon transmitting at 28.0745 MHz from a near-by location.

Then, I heard two strong signals: one quite close (~20 Km) and another further away (~300 Km ). After that, in short succession two AR stations came calling in, and towards the end of the contest, two NE Caribbean stations were also contacted: KP4 and KP2. Other US and DX stations were also heard (most notably one in PY) but no other contacts were made. Also, no modulated signal was heard in the USB portion of the band. Hence, the result was 6 QSOs and 4 multipliers.

Three years ago I had participated in the ARRL 10-Meter Contest as VE3DTI. I had then logged 87 QSOs in 23 DXCC’s and several S&P’s, a result that had been listed as “1st ONE MOQRP (+ spotting)”. However, this was a complete mistake because I actually was “2nd ONE SOQRP CW (w/o spotting)”, a finish that in spite of the reduced number of QSO’s (according to the scores submitted this year to 3830Scores.com) is likely to repeat itself.

Simultaneous to the ARRL 10-M Contest was the December 2016 Straight-Key WeekEnd Sprint (WES) of the SKCC, which provided for additional contacts, including one from DE, a state of rare occurrence in my logs. The overlap of both contests had an additional interest: for the ARRL 10-Meter Contest I was sending the exchanges with the single-paddle AME “Bushwacker” with the keyer set at 25-30 wpm, but for the SKCC WES I was using it as a “sidesweeper” (i.e., no keyer and lower speed). Switching from the first mode to the second required cancelling the keyer, short-cutting the terminals at the paddle and switching both the brain and the hand to the new swing-motion; the reverse actions had to take place when switching back to the keyer mode. Surprisingly, switching back and forth between both operating modes proved easier than expected.