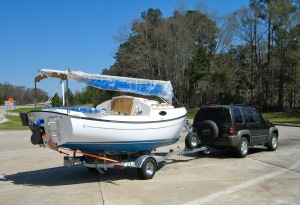 Last March 18 was celebrated as Sassy’s 7th birthday, and it is only fair that I try to relate the complete story of her migratory journey to Canada.

Early in 2009 I was resting back in the living-room of a posh and ridiculously expensive executive apartment in Port-of-Spain, reflecting about my return to Canada and my future life as a retiree – retirement was then less than a year away.

I was trying to make up my mind on a very important matter: what boat I was to get for my last years as solo-sailor. Three years before I had sold “Vándor”, the last hull ever built for the Alberg 22. For seven years it had been a very able and faithful sailing companion. However, it was too heavy for towing and cumbersome to launch and rig when single-handed. I was looking for a smaller sailboat, preferably a trailer-pocket cabin-cruiser that I could completely manage by myself and suitable both for fresh water cruising as well as gunkholing. I also wished it to be brand-new, as I did not want to spend much time doing maintenance. After much debate and research I honed on a few designs still in production: Montgomery 17, Precision 18, Sanibel 17/18 and the Com-Pac Sun-Cat 17. The latter particularly appealed to me because of its Mastendr® hinged mast design. However, I had never sailed a cat-rigged boat and wondered about its handling.

Late in September I was to attend a meeting in Washington, D.C., which as it happened, was to become the very last large Managers Meeting of my career. My return flight to Port of Spain was scheduled via Miami. Hence I decided to stop in Florida for a couple of days, fly to Tampa and pay a visit to the “Hutchins Co., Inc.” shipyard in Clearwater. For many years the Hutchins Company has been manufacturing unique designs of fiberglass boats under its “Com-Pac” proprietary brand. The company is a family enterprise, something that particularly appealed to me in these times of large and impersonal corporations. Gerry Hutchins together with his brother Richard have continued the business started by their father, Hutch, and already being carried on by a new generation of Hutchins: Tyler and Mathew. 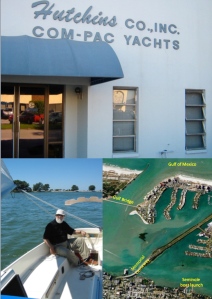 They did not have any Sun-Cat ready to go in the water, but a couple of SunDay Cats were sunbathing in the front yard. One was Tyler’s who kindly invited me onboard for a test-sail. The SunDay has the same hull and rigging as the Sun-Cat, their main difference being only the size of the cockpit and the cabin. We launched at the Seminole Boat Ramp at the west tip of Seminole Street, sailed under the Memorial Causeway and even ventured under the Gulf Boulevard Bridge at Sand Key, FL., but never quite made it into the Gulf of Mexico. There was not much wind and the sail lasted for just a couple of hours, but I was able to launch and rig the boat, try her in all points-of-sail and see how the boat handled in light winds. By the time we hauled her out my mind was made. 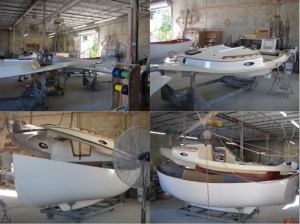 The following day I visited the yard and saw several Sun-Cat boats in different stages of assembly. I placed the order with Gerry and returned to Port-of-Spain for the last month of my official assignment with the Pan American Health Organization. Gerry would later be extremely patient and compliant with the many requests for detail that I would email to him during the following months. Eventually, arrangements were made for a return to Clearwater in March to take delivery of the boat.

Once back in Ottawa my attention turned into finding a suitable vehicle to tow the Sun-Cat. My preference was for an SUV 4WD, automatic, preferably with a diesel engine, and when I learned that a couple of Jeep’s Liberty 2006 RGB were for sale at “Capital Dodge” in West-Ottawa, I went for a test-drive and bought one on the spot.

In March I drove the Jeep from Ottawa to Clearwater. I did the trip south alone, but Martha flew to Tampa to join the adventure from there on. Together, we spent a few days visiting the west coast of the Florida Peninsula, sampled the local seafood and enjoyed the large Clearwater Beach with its superb sunsets over the water. We also discovered the amazing Dali Museum in St. Petersburg, FL (http://thedali.org).

But before hitting the road a small last-minute glitch had to be solved: the trailer needed a license plate. This required a visit to the offices of the State of Florida to request a temporary plate. This in turn required payment of the taxes related to the value of the trailer, taxes that I would eventually also have to pay at my return to Canada for some kind of a double-dipping tax. The trailer in question was a model specially designed for the Sun-Cat (Magic Tilt #BG4003-1″) and it had already caused a few headaches: the Canadian Ministry of Transport viewed it as a “vehicle not designed for the Canadian market being imported to Canada by a non traditional importer” and I feared that I might arrive at the border only to be told that the boat could pass but the trailer could not. As it happened, at the border I was given a form to be signed by an approved examiner and to be surrendered to the Canadian authorities when requesting the Ontario plate for the trailer. 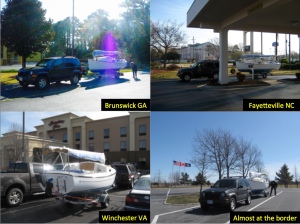 The first leg of quasi-1000 Km was done almost non-stop in eleven hours, and the first night was spent with friends in Washington DC. The rest of the nights were spent in Hampton Inn’s where I had points accumulated from a previous life, breakfast was included and price reductions were offered to CAA members. The fact that most Hampton Inns had ample double parking was essential for parking with the trailer locked to the car hitch. Both crossings of the St. Lawrence were made at Thousand Islands.

Cruising north, along the Virginian Appalachians in early spring, was a most unforgettable experience. The trip ended at the marina of the Nepean Sailing Club, where Sassy has been hosted every season ever since.

The last act was to find a suitable dinghy. First if was a Sevylor Rio but the definitive one was a 6-foot French Sportyak II. The US importer could not possibly deliver it to Canada. Hence, once again the Jeep had to go fetch a boat south of the border. Fortunately this time delivery was made to a place closer to Ottawa: the UPS Store in Ogdensburg NY, a little over one-hour drive away.

The name “Sassy Gaffer” was a suggestion from my good friend Dr. Greg Sherman, from the marshes of Northport ON; and the design and name on the sides of Sassy’s hull were the creation of my also good friend, sailor and designer extraordinaire, Bryan Mathews from Orangeville ON. “Sassy” is obvious when one sees the lines of the Sun-Cat, which happens to also be “gaff”-rigged, hence a “Gaffer”. Also, “Gaffer” was the name of the “pirate cat” in the “Muppet Show”. I always wanted her to have a “cat” name and my initial choice for a name had been “Piqtuqsiraq” – the Canadian Lynx in Inuktitut, which actually means “the one that travels in the blizzard”.